Fashion figured prominently in the 1925 Exposition Internationale des Arts Décoratifs et Industriels Modernes, an exhibition celebrating the French decorative arts that was the origin of the design term "art deco". The exposition was tremendously popular, with over 16 million visitors, and profoundly influenced the promotion and adoption of modernist styles in the United States. The Art Deco style of the mid-1920s was characterized sharp geometry, zigzags, and stepped motifs inspired by a variety of sources such as African and Mayan art, the lightning bolt of electricity, and the stepped design of skyscrapers.  The booming economy allowed American consumers to adopt the latest fashions at a rapid pace and, by the mid-1920s, even conservative women had adopted shorter skirts, bobbed their hair, and abandoned their corsets in their quest for sleek machine-age efficiency. 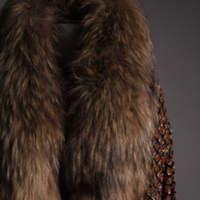 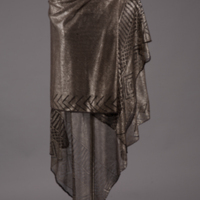 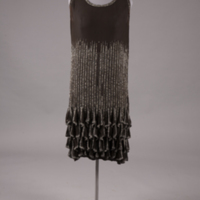 ← Diverse Times and Lands
An American in Paris →
Art Deco